Once Jesus took his friends up to a mountaintop, and there they saw his face shine with glory.  Moses and Elijah were seen at his side.  A cloud descended and the voice of God was heard:  "This is my beloved Son:  Listen to him."  It was a beautiful time, a holy moment:  Jesus' friends wanted to stay and never leave.

The next day they went back down into the valley and found Jesus' other disciples, surrounded by a great crowd, arguing points of order with the scribes, dejected because they were helplessly, impotently unable to cast out an unclean spirit that took away a person's voice and caused him to harm himself.

Nearly every preacher has preached some variation of that Transfiguration sermon about how following Jesus puts you both on the mountaintop of glory and down in the valley of pain.

Day Two of General Conference 2016 was that sermon. 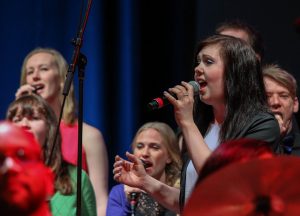 Members of Signatur, a choir from Oslo, Norway, sing during morning worship at the United Methodist 2016 General Conference in Portland, Ore. Photo by Maile Bradfield, UMNS.[/caption]

The day began with an amazing, mountaintop time of worship.  We entered accompanied by the uplifting songs of a group of young United Methodists from Norway.  The central Scripture was taken from Matthew 11: 2-6, where the imprisoned John has his disciples ask Jesus if he really is The One, and Jesus instructs them to go back and tell cousin John what they have seen and heard:  "the blind receive their sight, the lame walk, the lepers are cleansed, the dead are raised, the poor have good news preached to them."  United Methodists representing all corners of the globe read the first half of verse 4 in their native languages:  "GO and TELL John what you have HEARD and SEEN."  Then we filled in the rest, responding:  "The reign of God is here!" We heard and saw images of the good work that the United Methodist people are doing around the world in Jesus' name - a clinic, a prison ministry, a community garden.  We repeated that same response to what WE had seen and heard:  "The reign of God is here!" 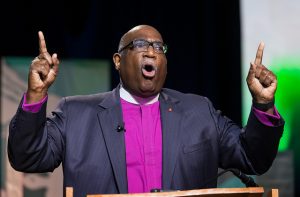 Later Bishop Gregory Palmer gave an Episcopal address that raised the roof off the Oregon Convention Center.  Few of us who heard it live will ever forget it.  He began with a call to the body to humble ourselves, telling us of how St. Bernard of Clairveaux, when asked once to name the four cardinal virtues, replied, "Humility, Humility, Humility, Humility."  Bishop Palmer asked us delegates to imagine ourselves lying prostrate in humility before our Lord and Maker, divesting ourselves of all position, privilege, and power, before rising again to stand before God and one another, freed of all hubris and self-sufficiency.  He implored us to tarry and to pray together for the Spirit's direction, quoting Eugene Peterson's statement that "waiting in prayer is the disciplined refusal to act before God acts."  Then he issued a ringing call to us to live together as "prisoners of hope":  not to hold a denominational pity party or a collective licking of our institutional wounds, not to devour one another in mutually assured destruction, but to turn towards one another instead of on one another and behold the image and likeness of God in every person.

As he spoke, behind Bishop Palmer was the General Conference's central image of Mount Hood in the background.  As the Spirit flowed through his preaching, we found ourselves up on that mountaintop.  The whole body was transfigured.  The voice of God was heard.  We all wanted to stay and never leave.  Transfiguration:  the reign of God was here! 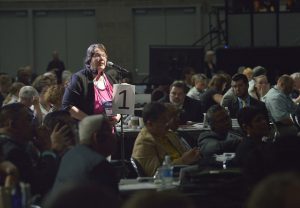 The Rev. Melanie Carey, a clergy delegate from the Detroit annual conference, speaks to the United Methodist General Conference in Portland, Ore., on May 11. Tomlinson spoke in favor of proposed Rule 44, which would allow small discussion groups to be used to handle sensitive themes. Photo by Paul Jeffrey, UMNS.[/caption]

Then, of course, we descended from the mount of Transfiguration down into the valley of Legislation:  from the reign of God to what felt at least like the reign of Robert's Rules.  The video wouldn't load.  We got lost in a labyrinth of parliamentary procedure, hacked our way in circles through jungle vine amendments, chased our tail round and round with questions about how we would discuss and make decisions as a body.  We seemed trapped in a kind of chicken and egg conundrum:  what rules do you abide by while you are deciding what rules to use?

Please do not misunderstand me:  there was no acrimony in these discussions.  Those self-righteous commentators who take the part of Judas at the anointing of Jesus ("What a waste!"), and those amateur comedians who hold a snarkfest surrounding General Conference and paint it as a maelstrom of negativity, don't see what I see up close:  the almost inhuman patience through which the approximately 850 delegates bear with one another as we try to cross divides of language and culture and seek our way towards fairness.  Everyone remained courteous and respectful of one another.  A lesser group of people might have snapped and murdered each other:  the closest we came to outright conflict was to say, "with all due respect, Bishop . . ."

And yet we felt something like those dejected disciples down in the valley:  embarassed in front of the watching crowds, arguing with the ecclesiastical lawyers, unable ourselves to fix what was broken.  As one of 850+ delegates, you feel somehow powerless, held captive to this fallen Principality and Power called Robert's Rules of Order, where you are forced to spend half of your mental energy not merely weighing the merits of a given proposal, but trying to figure out the rules by which the chess game of motions and amendments is played.  It's hard to look up to the mountaintop when your head is buried in the scutwork of reports and the arcana of procedure.  It feels like Disfiguration.

And yet I made a pledge before this General Conference that I was going to stay positive, hopeful, and grateful - and I have found much to be thankful for and to celebrate here.  As much as I may not like parts of this process, I love, love, love these people.  I can tell you, like one of John's disciples, that this is what I have seen and heard so far:  the reign of God is here.

During our opening worship and Holy Communion, the Chamber Choir from our very own High Point University sang a hauntingly beautiful rendition of words found written in the bombed out Warsaw Ghetto:

The words were made even more poignant by the fact that they were sung amid a silent protest by advocates of LGBTQ inclusion.  Hearing those words, in that context, amid Holy Communion and visible division, brought me to tears.  The mountaintop and the valley are one, and the reign of God is equally present in both places.

When he comes down from the Mount of Transfiguration to find his bumbling disciples arguing and ineffective, having tried to do his work without asking him first for instruction and help, Jesus shows his exasperation towards his people:  "How much longer do I have to put up with you?"  But rather than casting them completely aside, instead Jesus himself temporarily takes the wheel.  He tells the father of the possessed boy that his church, I mean his child, can be well again - "All things are possible for the one who believes."  The father gives an honest response that is one part confession of faith, one part confession of doubt, and all parts prayer:  "Lord I believe; help my unbelief."

It is enough.  Even though the exorcism convulses the boy nearly kills him in the process, Jesus takes the child's hand and raises him to new life.  He will no longer harm himself.  And the boy is not the only one who will be made whole:  Jesus also takes his disciples aside and teaches them how this reign of God works, so that next time they can get it right:  "Don't try this again without me, ok?  This kind can come out only through prayer."

How do I feel about General Conference so far?  Is the reign of God really here?  Can this self-harming church be made well?

My response is a father's honest prayer:

"Lord I believe - help my unbelief."

Jeremy Troxler is a clergy delegate from Spruce Pine, NC