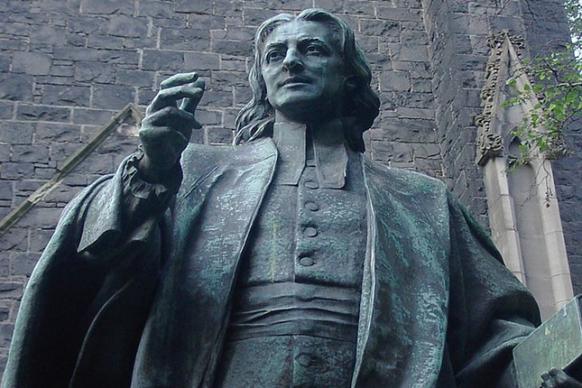 By Jeremy Steele (UMCom) History is more than facts and figures. It is full of real people with real stories. Connecting with those people and stories helps us understand our lives and discern God’s direction for our future. That is why it is important constantly to connect our teaching back to the important people in our history. To help you do that, we have gathered some interesting, and maybe even surprising, facts about John Wesley to help you connect United Methodist history to your next lesson.

Wesley was deeply convicted that God is concerned about our earthly life as well as our heavenly one. To that end, he wrote a medical text for the everyday person titled Primitive Physick. Check outGlobal Ministries’ summary or read the full version. The book detailed the current knowledge about home remedies and went through 32 editions, making it one of the most widely read books in England. Many of Wesley’s cures and tips on healthy livingremain widely accepted. While some of his advice was wishful thinking, the most important part of his philosophy was his insistence on continual observation to support hypotheses. Wesley boldly questioned modern doctors — how they sometimes treated humans like machines; that much of their “medicine” lacked merit and they lacked evidence to support its efficacy. By the same token, some of Wesley’s beliefs certainly needed more supportive evidence. For instance, Wesley recommended holding a puppy against the stomach to cure stomach pain. He offered dried and powdered toad pills for asthma. He also enjoyed regular dips in cold bathwater, thought to be a near panacea. It sounds strange to us, but many leading minds during Wesley’s time, espoused these sorts of folk remedies. And honestly, who doesn’t feel better after holding a puppy? The point is, like David — who had the heart of God and still fell short — even the greatest leaders with the biggest hearts are fallible.

Over the years, Wesley had serious theological differences with another popular pastor named George Whitefield. Though they both argued passionately, Wesley reflected on these differences in a memorial sermon for Whitefield by saying:  “There are many doctrines of a less essential nature. ... In these, we may think and let think; we may 'agree to disagree.' But, meantime, let us hold fast the essentials. …” This appears to be the first recorded use of the term. It was a hallmark of Wesley’s way of holding to his convictions while remaining in connection with those with whom he disagreed.

Wesley rode 250,000 miles! He was convinced that it was important for him personally to spread the gospel through relationships and continue to grow closer to God in those relationships. Asked if he would consider walking instead of riding, he replied, “Nay."

4. Wesley had serious doubts about his faith.

Questioning one’s faith should not be disparaged. Doubts are essential to making any belief system one’s own. They do not mean that one will let it go. In fact, even as Wesley struggled with deep doubts about faith, he followed the wise instruction of a mentor who told him to “preach faith till you have it; and then, because you have it, you will preach faith.” Even as we struggle, we can maintain our hold on the truths we question until we can settle all of our doubts.

5. “Methodist” was originally a derogatory term.

Though the origins of the term “methodist” are in dispute, it is clear that it was originally used by outsiders to mock John Wesley and his early societies because of their dedication to following a method for growing closer to God. They ended up accepting the term, considering it a positive descriptor of their movement. Way to own it, Methodists!

6. Wesley counseled people to “eat a little less than you desire.”

Staying slim was far from Wesley’s goal (1), though he did weigh in around 128 pounds. This was not the result of dieting, but rather of a practice to ensure that people were not ruled by their natural desires, but exercising control over them.

7. Wesley never intended to split from the Church of England.

However, when the revolution happened in the American colonies, most of the Anglican priests returned home. Faced with the fact that none of the Methodists in the colonies could receive the sacraments, Wesley ordained ministers whom he sent to do the same in America (he was practical even when it caused problems). That act was the beginning of the separation that formed the Methodist Church (2) in America. The Methodist Church in England did not officially form until after Wesley’s death.

8. Wesley never said this famous quote attributed to him.

It has been on the back of more than one United Methodist youth camp T-shirt: “Do all the good you can, by all the means you can, in all the ways you can, in all the places you can, at all the times you can, as long as ever you can.” Though the quote is often attributed to John Wesley and isconsistent with his perspective on life, many historians have confirmed there is no record of Wesley ever saying that.

9. Wesley believed you could not be a Christian on your own.

He said that we needed to be involved in “social holiness.” Though some often think this term is synonymous with “social justice,” its meaning is quite different. Wesley believed we could only grow as Christians in community. In his preface to the 1739 hymnal, he was adamant that “the gospel of Christ knows of no religion but social; no holiness but social holiness.”

The beginning of Methodism (3) was a group of four who called themselves the “holy club” at Oxford. When Wesley died in 1791, he left behind a movement with 72,000 members in the British Isles and 60,000 in America. Want to read more about our history as United Methodists? Global Ministries offers many of Wesley’s writings and sermons online. United Methodist Communications and the General Commission on Archives and History teamed to test your knowledge of more than 200 years of our church’s past. So after you study up, take theUnited Methodist Church History Quiz and share it with your friends and family! Want to know the name of John Wesley's horse? Actually, we don't know that one. But if you need help clarifying the denomination's position on baptism or if you're looking for mission opportunities, just ask InfoServ, a ministry of United Methodist Communications and the official information service of The United Methodist Church. These facts will equip you with lots of great discussion starters you can use at your next dinner party or church gathering. Let’s have some fun with history! References:

When Jeremy and his wife are not playing with their four children, he oversees youth and college ministries and leads the evening worship service at Christ UMC in Mobile, Al. Jeremy is an author of several books and resources that you can find at JeremyWords.com or follow him on Twitter!