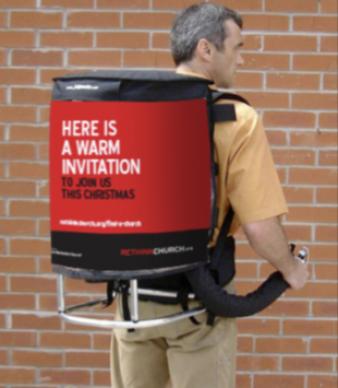 Nashville, Tennessee: The United Methodist Church is taking to the streets of nine major U.S. cities to offer the gift of hospitality this Christmas with a warm invitation and a hot cup of cocoa. As commuters, holiday shoppers and eventgoers crowd the most trafficked areas of Dallas-Fort Worth, Denver, Portland (Ore.), Philadelphia, Baltimore, Atlanta, Chicago, Cleveland and Washington, D.C., United Methodists will be among them -- hoping to warm their stomachs and warm their hearts. Street teams will be wearing what look like bright red jetpacks, but they’re actually bearing gifts - tasty cups of hot cocoa served from state-of-the-art backpack drink dispensers. The paper goblets filled with chocolate-y goodness exhort cocoa drinkers to “Rethink Church” and point them to a website – rethinkchurch.org/find-a-church – where they can find a local church in their area. Mobile billboards cruising the streets will do the same. National advertising is also running on digital media and cable television. “We think that church can happen anywhere where people experience the spirit of Christmas," said Dan Krause, chief executive of United Methodist Communications. "We want to carry a message of hospitality out into our communities and welcome everyone to attend a United Methodist place of worship as Christmas nears.” The unique outreach program from The United Methodist Church, which takes place December 15-18, comes at a time of the year when many people are particularly lonely or feeling that something is missing from their lives. In fact, research shows that twice the number of U.S. adults say they are lonely compared to 10 years ago. That’s despite being continually connected more than ever before through texting, Facebook, Twitter, Snapchat etc. “We’re offering an invitation to come into our community where we continue to explore the true meaning of Christmas,” said Krause.