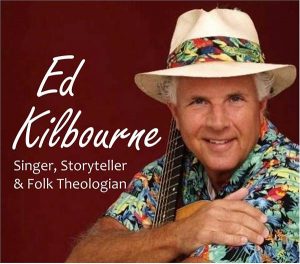 Singer, storyteller, and folk-theologian, Ed Kilbourne will present a concert open to the public at Elkin First United Methodist Church on Sunday, November 13 at 4 p.m. in the church sanctuary. This popular artist is known for his collections of moving music, quirky humor, and insightful monologues. He combines his acoustic guitar and singing with a storytelling style often compared to that of Garrison Keillor, the radio humorist from 'Lake Wobegon'.   He grew up in China, Korea and Japan, where his parents served as missionaries. Ed began his career in the early 60's, singing in folk groups while in high school and college. After completing college and seminary, he moved to Atlanta, Georgia and began his career there as a United Methodist minister. As his gifts for teaching and performing became known, he was invited to serve the church as a musician and spiritual resource person, touring extensively in the Southeast and later, throughout the nation. In the early 1970's Ed moved to western Colorado but in the late 70's, he returned to the Southeast and after living in South Carolina for 25 years, he now resides in South Florida.   During a professional career of 8000-plus solo appearances over the last 40 years, he has worked in every region of the United States and toured in Europe. Ed has recorded 23 albums, among them a 4-CD collection of in-concert performances of his stories and songs, "The Grateful Ed Live" released in 2008. His latest CD's are "A World Of Good" and his second greatest hits collection, "The Best Of Ed/Volume 2".   Ed's wife, Kathleen, is a United Methodist minister. She is the director the Master Of Arts In Practical Theology degree program on the Charlotte campus of Pfeiffer University in North Carolina. She also serves as the coordinator of the Center For Deacon Education, a partnership with Wesley Theological Seminary in Washington, DC. Ed and Kathleen make their home in Englewood, Florida on Manasota Key.   First United Methodist Church is located at 340 Hawthorne Road in Elkin. The concert is free. A free-will love offering will be taken to support this ministry. For more information, contact the church at 336-835-2323 or go online to www.elkinfumc.org. DOWNLOAD POSTER