[metaslider id=4852] Just hours after the NFC Championship game on Sunday, January 24, the Carolinas were challenged by Rev. Brad Laurvick of Highlands UMC in Denver to collect food for the hungry. 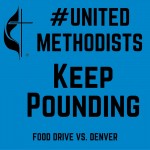 Churches in the Western North Carolina Conference began responding quickly to the #UnitedMethodistsKeepPounding food drive, and by Wednesday of that week, 87 churches had officially signed on.  By Thursday, January 4, there were over 160 churches and organizations that had taken the challenge and sent emails to the official address.  By Superbowl Sunday, the response was overwhelming, and 279 churches, groups and businesses had responded with donations of food and cash. The total number of food items collected by the Western North Carolina Conference during the food drive was 584,410 along with 45,000 pounds of potatoes given by the Society of St. Andrew to the cause. The North Carolina Conference collected 52,481 items from 75 churches and organizations, along with 132,000 pounds of potatoes from two gleaning events. Between the two conferences, we collected a total of 636,891 items and 177,000 pounds of potatoes. The challengers from Denver collected 360,664 items during the same time period from over 140 sites in Colorado and several western states. The Western North Carolina Conference wishes to thank the many churches, the Boy Scouts who contributed greatly to the effort, the many businesses organizations, and a host of individuals that were a part of the challenge. Rev. Amy Coles, Assistant to Bishop Goodpaster, has been instrumental in working with pastors and organizers during this challenge. She reflected on the experience, “This food drive exemplifies our connectional system as United Methodists at its best. It's been incredible to see how many churches, community groups, businesses, and individuals have participated.  The generosity of all who donated food is inspiring.  Together, we've made a positive difference in the food insecurity of our neighbors.  My prayer is that this effort is just the beginning of the ways that we might unite our efforts in addressing the needs of our communities and the world.”