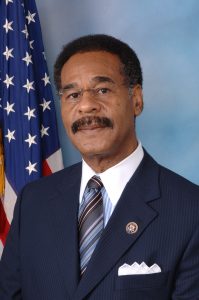 Congressman Emanuel Cleaver from the 5th District of Missouri was in North Carolina helping to get out the vote this week. Cleaver is an ordained United Methodist clergy from the Missouri Conference.  He served as pastor of St. James United Methodist Church in Kansas City, MO from 1972-2009. During his time as pastor of that church, he was elected to the city council of Kansas City, and was later elected as the first African American mayor of the city, serving two terms from 1991-1999. He was first elected to the House of Representatives from President Harry Truman's home district in 2004, and has served 12 years.  He is running for re-election in 2016. Cleaver was in Durham, NC helping to get out the vote in the state. The interview below captured him speaking about his life in faith and politics and the influences of other pastors, Ralph David Abernathy, Joseph Lowery and and James Lawson. He also discussed the importance of voting as citizens of the United States and being involved in the political sphere as Christians. And, he spoke about the historic nature of a life-long United Methodist woman having a 50% chance of being elected President. Listen to "Interview with Rep. Emanuel Cleaver" on Spreaker.