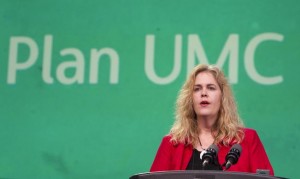 A ruling on the constitutionality of legislation for a proposed organizational plan for The United Methodist Church has been deferred until May. To make a declaratory decision about one specific piece of proposed legislation, the United Methodist Judicial Council said in Decision 1303, “could intrude” on the full legislative authority of General Conference. The denomination’s top decision-making body meets May 10-20 in Portland, Oregon. Although it has the authority to do so, early action by the Judicial Council “could potentially place a constitutional seal of approval on one proposed legislative item,” the decision said. Other items of proposed legislation “might also deserve advance consideration as to their constitutionality.” The request for review, which came from the United Methodist Council of Bishops, was on the Oct. 21-24 fall meeting docket for the denomination’s top court at the Hilton St. Louis Airport. The original “Plan UMC” was approved by delegates at the 2012 General Conference in Tampa, Florida, but the Judicial Council declared the plan unconstitutional on the last day of the conference. Six of the delegates behind the previous plan created the revised version in hopes of passing the constitutionality test. Several briefs supporting or opposing “Plan UMC Revised” were filed with the council. During an Oct. 21 oral hearing, Bishop Gregory Palmer represented the Council of Bishops, as petitioner, and the Rev. Clayton Oliphant and Lonnie Brooks spoke on behalf of the proposed plan as respondent. In keeping with the council’s practice for oral hearings, others could not speak unless the respondent or petitioner chose to share the allotted time, which did not occur in this case. Oliphant said the Judicial Council was not being asked to judge Plan UMC Revised on its merits as a proposal to restructure the church’s general agencies but to consider whether it would be a valid option. “While Plan UMC Revised closely mirrors Plan UMC, we believe the constitutional deficiencies identified in Judicial Council Decision 1210 have been corrected,” he told council members. Oliphant also noted that the new legislation “is a fairly simple revision of an act of General Conference that was overwhelmingly supported by that conference.” The revised Plan UMC abandons the proposed General Council for Strategy and Oversight that would have overseen the work of some agencies, while beefing up responsibilities of the Connectional Table. The Council of Bishops is not taking a position to support or oppose Plan UMC Revised, the Judicial Council decision pointed out, but made the request for a declaratory decision “in order to better facilitate the work” of the 2016 General Conference. That request is proper, the council said, but “there remains a subtle but important consideration about the merits of rushing quickly to assess the constitutionality of one piece of proposed legislation when other proposed legislation may also exist on the same issues that the ‘Plan UMC Revised’ seeks to address.” If additional proposals emerge, the Council of Bishops could decide to send those legislative items to the court “for constitutional assessment” and Judicial Council could receive briefs from other interested parties on the matter. “Then it will be possible for the Judicial Council to honor both this request and any other considerations that might be affected by our declaratory decision,” the decision said. Judicial Council will meet May 6-9 in Portland, just prior to the opening of General Conference. Read about further decisions of the Judicial Council Bloom is a United Methodist News Service multimedia reporter based in New York. Follow her athttps://twitter.com/umcscribe or contact her at (646) 369-3759 or newsdesk@umcom.org