Sharing Jesus at the 50th Gathering of the Laity

The laity of the Western North Carolina Conference for the 50th Gathering of the Laity on August 7 & 8 at Lake Junaluska Conference and Retreat Center. The entire event was held in the newly refurbished Terrace Hotel.  Nearly 200 participants from across the conference were in attendance. The gathering was bittersweet, in that it was the last one in the series.  However, the Board of Laity is making plans for new possibilities and opportunities for engaging the laity of the Conference. [caption id="attachment_3429" align="alignright" width="300"] 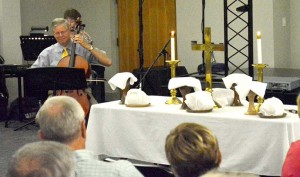 Saxon Scarborough plays cello as offertory[/caption] This year’s theme was “Sharing Jesus” and featured guest speakers, Bishop Jonathan Holston of the South Carolina Conference and Cindy Thompson, the Executive Director of Boundless Impact based in Greensboro, NC.  Thompson is also one of the founders of FlameBuilders, a lay development institute focused on young adults in our conference. Opening worship and communion on Friday evening was led by Rev. Saxon Scarborough, Minister of Music at First UMC in Gastonia, with Bishop Holston as the preacher and celebrant. His sermon was based on the scripture Matthew 25: 31-46, and focused on the idea that “we are never too busy to be in God’s service.”  He remarked that “we have so much going on, and so much stuff, that it sometimes gets in the way of serving.” [caption id="attachment_3430" align="alignright" width="244"] 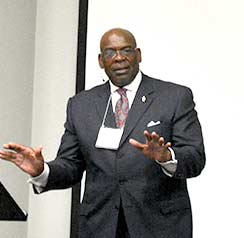 Bishop Holston[/caption] He intoned John Wesley’s concern for the church that “we never get so busy living life that we forget who we are and whose we are.” Using humor and personal stories he challenged the gathering with these two maxims: 1) You are not perfect; and, 2) It’s never too late to get it right. He led in to communion with a touching story of God working in the midst of the horror of the June shootings at Mother Emmanuel AME Church in Charleston. “What someone meant for bad, God used for good. People stopped and made Charleston a sanctuary of prayer, and God made a way in that city.  Not long after that the flag came down and it wouldn’t have happened without God working among the people.  We are never too busy to get it right.” The Gathering continued on Saturday morning and the afternoon session with Cindy Thompson.  She shared her own journey as a lay leader and challenged attendees to get into their "Uncomfortzone" for maximum discovery, growth and impact. Using FlameBuilders, a global leadership and spiritual formation institute for young adults in the WNCC, as an example, Thompson described 3 ways to get out of your comfort zone: 1) Discover our Purpose: Discerning call in a universe of options; 2) Process of Co-Creation: Charting a path forward in a world of fear, doubt and ambiguity; 3) Cross-Boundary Imperative: Created to be in community with all. She also shared learnings from the successful pilot program of FlameBuilders on how to engage young adults by meeting them where they are and making accommodations for them in our congregations. Later on Saturday morning, Mike Farmer of First United Methodist Church in Gastonia shared the laity address, followed by another session with keynote speaker, Bishop Holston. The Gathering closed out with a concert featuring the Junaluska Singers. The Board of Laity invited participants to offer input on the future of the Gathering during the weekend. They extend their invitation to everyone in the Western North Carolina Conference through this online survey: Gathering of the Laity Survey- Share Your Input