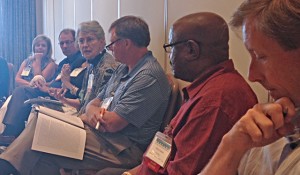 As it celebrates its 75th anniversary, the National Association of Schools and Colleges of The United Methodist Church (NASCUMC) is undertaking two ambitious projects. The 39 members attending the annual meeting July 26-29, 2015, in Williamsburg, Virginia, held a series of conversations that will culminate in a collection of essays on what it means to lead United Methodist-related educational institutions in 2015 and beyond. The second initiative, two years in the making, is the implementation of the organization’s Heralding Our Commitment to Justice and Dignity resolution, passed by NASCUMC in February. NASCUMC is supported by the General Board of Higher Education and Ministry (GBHEM). NASCUMC partnered with The Aspen Institute to create a four-day seminar specifically for leaders of United Methodist-related educational institutions. Attendees completed 20 readings in advance of the meeting, and these readings informed 15 hours of small group discussions on “Leadership, Values and the Future of United Methodist-related Education.” Dr. Lawrence D. Czarda, president of Greensboro College and chair of NASCUMC’s program planning committee, said, “We, as leaders of United Methodist-related educational institutions need to understand our Wesleyan heritage and how this heritage shapes the mission of each institution as well as each leader’s vision.” Seminar sessions covered questions and themes relating to the nature of United Methodist-related education, vocation and leadership. Dr. Rosalind Fuse-Hall, president of Bennett College, remarked, “I am grateful that this meeting gave us an opportunity to engage with our colleagues, to  think deeply, and to spend time reflecting on some of John Wesley’s sermons.” The Aspen Institute assigned one moderator to each of three small discussion groups, and NASCUMC assigned a member to convene each group. The Kingswood group was led by Dr. Todd Breyfogle, director of seminars for the Aspen Institute, and Dr. Robert Pearigen, president of Millsaps College. Stephen Holley, partner at Poss Architecture + Planning, and Fuse-Hall led the Aldersgate group. The Cokesbury group was led by Jay Marshall, managing director at AlixPartners, and Dr. Sandra S. Harper, president of McMurry University. A compilation of essays by NASCUMC members will be published following this meeting. The meeting also included an orientation to the Justice and Dignity initiative, which stemmed from the resolution passed at the organization’s February 2015 meeting. Dr. Mary Elizabeth Moore, chair of NASCUMC’s mission committee and dean of Boston University School of Theology, and Dr. Melanie B. Overton of GBHEM reviewed the commitments contained in the resolution and oriented members to resources that will assist campuses in carrying out these commitments. An initiative of this scope has not been taken since the 1970s. These two commitments are to “have conversations about whatever issues are divisive in your context and to take an honest assessment of your campus’ policies, practices and culture,” Overton said. The topics that each campus community will discuss and the formats in which they will have these discussions will vary according to the needs of each campus community. “This has been a difficult year in the United States in regard to race,” Moore said, for example. “It is clear to me that race should be Boston University School of Theology’s primary conversation this year. There were deep, deep feelings as we ended this year. We have to have this conversation with a lot of honesty, respect and compassion.” Moore explained four steps in designing these conversations: selecting a topic, trying to hear as many voices as possible, conducting the conversations and respecting rules for the conversations. Moore led the group in some training in how to create “spaces where wise people can talk with one another.” Four volunteers formed a circle, sharing issues and experiences from their home campuses. The rules were clear, and included such things as: listening to even the “ugliest truths,” respecting the dignity of all—including those not present—and not making assumptions about the motivations of others. Overton led a portion of the training on a digital resource bank that will be critical as NASCUMC members return to their campuses. The website includes information on the background of the initiative, conversation guidelines and resources for shaping institutional policies, practices and culture. The initial database of resources is a rich collection of 75 documents from 12 campuses related to a variety of issues, ranging from gender and sexuality to race, poverty, class, violence and a myriad of other hot button issues. Users can download resources to see what their colleagues at other United Methodist-related institutions have designed at their campuses. This collection of materials makes for a “robust” set of resources that will grow as other campuses begin to submit, Overton said. In addition, NASCUMC’s membership committee, led by President Beth Dinndorf of Columbia College, welcomed eight new members with a 24-hour orientation program. At the conclusion of the meeting, outgoing president Dr. Haywood L. Strickland passed the organization’s gavel to Dr. David C. Joyce of Brevard College. Atwood is freelance writer in Richmond, Virginia.