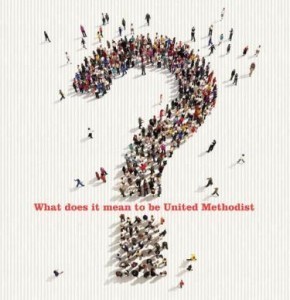 United Methodist Communications Office of Public Information Roles affect perception of what it means to be United Methodist Nashville, Tenn.: In the U.S., perceptions of United Methodist values differ by a person's role and experience. What has a high degree of importance to a pastor may be of much less significance to a church member, and especially to those who don't attend regularly. But most United Methodists agree that an emphasis on God's grace is very important, as well as having a Communion table where all are welcome. These are some of the findings of an extensive new quantitative study by United Methodist Communications conducted in November-December 2014. The survey, conducted online among a representative sample of 400 United Methodist members, and phone surveys of 850 pastors and leaders, finds that opinions about what it means to be United Methodist are as diverse as people's reasons for being a part of the church. More than 39% of member respondents are United Methodists because they were born into United Methodist families. Beyond that, the reasons respondents gave as to why they became a member of The United Methodist Church were varied. Beliefs and teachings were the second most frequently mentioned reason for affiliation (17%), followed by liking the people, liking the pastor, or marrying into a United Methodist family (all 8%). Some like the church’s emphasis on social issues (4%), while 2% find a convenient location to be the prevailing factor. Uniquely United Methodist Having Wesleyan theological roots and open Communion were the most frequently mentioned attributes seen by members as uniquely United Methodist, compared to other Christian denominations. Yet only 19% of members considered Wesleyan theological roots as a "very important" core value. Pastors and church leaders also named those values, but were more likely to also mention being a connectional church and funding the church through shared giving. Both were less likely to see acceptance of different views and church diversity as qualities unique to United Methodism than were members. Most important values The survey found some pronounced differences between what pastors, church leaders and members consider important values for The United Methodist Church. Members’ responses were quite fragmented, but more than half of members surveyed agreed that an emphasis on God's grace, open Communion, acceptance of all people, church fellowship, a strong Scriptural foundation and an emphasis on mission and outreach in local community were very important values for The United Methodist Church. Pastors were more solidly in agreement, with more than 90% of those surveyed declaring the importance of an emphasis on God's grace, open Communion, an emphasis on local mission and outreach and a strong Scriptural foundation. But some of the values which rated high for pastors were low for members; for example, a balance of personal and social holiness was of top importance to less than one-third of members surveyed while 81% of pastors put it in the ”very important” tier. Church fellowship was more important to leaders than any other group, and they were more interested in bringing people to Christ than were other members (88% vs. 45%). Both leaders and pastors cited an emphasis on worldwide mission twice as frequently as members. “What we're seeing is that people in different roles with different experiences have different perceptions,” said Sherri Thiel, interim chief executive of United Methodist Communications. “Church leaders are more likely to share pastors' values, possibly because their roles bring them into greater contact with work at the denominational level, while members are more focused on personal and local experiences.” Differences among members of the same groups The survey found that United Methodists who attend church regularly were twice as likely as those who attend infrequently to say a strong Scriptural foundation and an emphasis on bringing people to Christ were among the most important values for The United Methodist Church. In fact, a strong Scriptural foundation was the value most often espoused by frequent attendees as being very important. There were minimal differences for some other values, such as the importance of rational thinking or being open to questioning matters of faith, regardless of the frequency of church attendance. There were appreciable differences between pastors with different theological training where some values were concerned. For example, just 54% of pastors who attended non-United Methodist seminaries cited being a connectional church as a very important value, compared to 72% of pastors who attended United Methodist seminaries. Being "accepting of different views" was very important to only 44% of pastors from non-UM seminaries vs. 68% of pastors from UM seminaries. But when it came to identifying values that were uniquely United Methodist, there was little to no disparity. Among leaders, women and men had differing viewpoints on some topics; 73% of women said being accepting of differing views was very important, compared to 51% of men. Women were also more supportive of worldwide mission and outreach (73% vs. 57%). Top 10 Values Seen As Very Important

United Methodist Communications conducted this research in several phases. The first phase involved focus groups with pastors, leaders and members in four U.S. cities in different regions of the country. These qualitative findings provided direction for the development of the surveys. The phone survey included pastors randomly selected from United Methodist databases. Leaders were selected randomly among current subscribers of Interpreter magazine, who have been designated as key leaders by pastors in their local church. Findings for general church membership resulted from an online poll among United Methodists conducted through an outside consumer research panel.