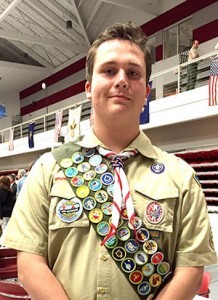 Samuel Herring, a member of Aldersgate United Methodist Church in Shelby, NC will celebrate the highest honor of achievement in the Boy Scouts of America when he receives his Eagle Scout Award on May 31, 2015. Sam has been a member of Pack and Troop 107 (sponsored by Aldersgate UMC) since 2004.  He is a junior at Crest High School in Cleveland County and has been active in his church youth group and served as a youth representative to the Administrative Council. He and a group of four from Shelby traveled to the Dominican Republic and built a bath house for a Haitian batey in the Polo region. A batey is a company town where sugar cane plantation workers live. They completed this project in eight days with the assistance of local labor in August 2013. The project had its beginnings after Sam had made a couple of trips to the Dominican Republic with his parents, Chris and Dawn Herring.  They had been on several trips with United Methodist Volunteers in Mission that regularly went to the Dominican Republic each winter. Sam’s first trip with his parent’s was in the eighth grade, and he went again a year later. During those trips he saw the difficulty that the community had in getting fresh water to drink and bathe. According to his father Chris, “Prior to the project, the people of the batey had to carry water from a quarter mile away.” He designed the bath house with the help of Shelby plumber, Mark Rullman, who also donated materials. Sam estimates that he spoke to about 20 different groups to raise money and awareness for the project in the months leading up to the trip to the Dominican Republic. Sylvia Wihem, the pastor of Aldersgate UMC, said this about Sam’s project, “Aldersgate has had a long involvement with the Dominican Republic, but with Sam’s project it was evident that it wasn’t just his parents or his church’s ministry, it was something he owned for himself---a desire to help the Dominican people with one of the basic resources of life.” “It is enlightening and humbling at the same time,” according to Sam, when he was asked what he learned from his project. “The people in the Dominican Republic lack basic resources that we take for granted here.  It is humbling to see that they live a full life without all of the material things we have.” Wilhelm adds, “He is truly a dedicated young man.  The impact of his bathhouse project on the people in the Dominican Republic is immeasurable.  To have a clean, sanitary place to gather water will literally change their lives.” _ _ _ Below is the video that will be shown at the awards ceremony, and was submitted to the Piedmont Council of the Boy Scouts of America, where he received "Project of the Year" recognition: Here is a link to a May 4, 2015 article that appeared in the Shelby Star: Local Eagle Scout provides clean water in the Dominican Republic