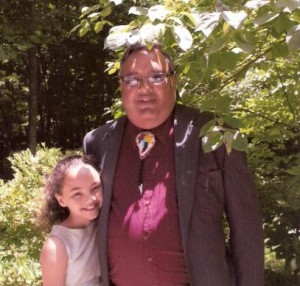 Carson and Sade, 12, are members of Triad Native American United Methodist Church in Greensboro, North Carolina.Administrative Council chair Daphine Locklear Strickland, notes, "To the average person, this might seem like a small thing, but Carson and his daughter look forward to this conference as the only vacation time they have to celebrate with other Native Americans from all over the Southeastern Jurisdiction." Carson, a member of the Lumbee tribe, explains that without the financial assistance of the fund, they could not afford to attend. "I am a single parent and only work usually 20 hours a week at UPS," he says. "I do some yard work in the summer. It takes all the money I make to pay my bills and care for my daughter. "When I first started attending the conference 12 years ago, I only knew the members of my church, and it was something different to do," Carson says. "I met new people from all over the South. I enjoyed attending the classes that were taught by different people, mostly Indian. I really enjoyed Bible study." Carson says in attending the conference, he developed a close bond with Daniel Dubby, who attends the conference with the children of the Mississippi Choctaw. "I really like being with the different people and my daughter meeting other children like us," he says. "Sade attends children programs. I believe it helps her self-esteem to sing and play and do crafts with other children." At Triad Church, Carson serves on United Methodist Men, social action and hospitality committees. He also delivers bread to families in the community and ushers at worship services.

'Rich in the love of God'