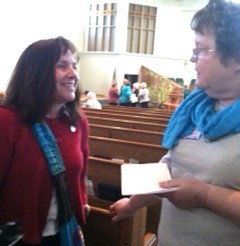 Haywood Respite’s Program Manager Jody Halstead talks with a potential volunteer at the Blue Ridge District UMW Prayer Breakfast.[/caption] by Emily Cooper Jody Halstead’s prayer life has included everything from a child’s bedtime rituals to God laughing at her. Halstead, an RN, deaconess and program manager of Haywood Street Congregation’s Respite Center, told about 200 United Methodist Women at Mills River UMC Saturday prayer can be risky, life-changing. Her prayer life has evolved from the time she was a “cradle Methodist.” The daughter of a UM pastor said prayer can become ego-centric – “please help me.” Two years ago, Halstead worshipped at Haywood and its leadership was talking about how it might offer more service. The group considered respite care for the homeless. Halstead was going to a prayer retreat and a Haywood leader said, “Jody, pray about respite.” As she walked in prayer for Haywood at the retreat, “God was laughing at me.” “I already told you …” was his response. Suddenly she saw how her experiences and studies all tied together – studies to become a deaconess, her time at the Academy for Missional Wisdom, her gerontological certification and work as a faith community nurse. She saw people leaving the hospital with no place to recover as God’s desire for her. Follow-up medical appointments are almost non-existent without a place such as Haywood Street Respite. People who have to live on the street have their energy eaten by efforts to find a place to sleep and something to eat, Halstead said. Since opening in January 2014, Haywood Street Respite has provided a place to sleep, eat and recover among a caring family. Of the 95 homeless released to Haywood’s care last year, 75 percent were able to live somewhere other than on the streets after their Respite stay. “God is calling us to be church this way in this time,” she said. “As we pray, we need to be as expectant as expectant parents,” Halstead said. “Prayer is a posture, but it’s not physical. It is a constant awareness, a willingness to be available. We need to listen as if we expect to hear from God. Then we begin to live our whole life as a prayer, praying without ceasing.” Respite calls on volunteers to drive people to medical appointments, to bring meals on weekends and to spend time with patients. Halstead can be reached at: jhalstead@haywoodstreet.org UMW President Joanie Strom led the program. Lucy Earls said UMW social concerns include the high rate of human trafficking in North Carolina. Beverly Hill announced a district UMW civil rights study tour to Alabama and Mississippi in October. District Superintendent, Dr. John Boggs told UMW district leaders and members about a development for the Congregations 4 Children program: the Department of Public Instruction Summer Food Program is eager to have meals that are prepared in school cafeterias delivered by church groups to children in need. Emily Cooper is a member at Central UMC in Asheville and is the former editor of the South Carolina Christian Advocate