Board of Laity Discusses Gathering of the Laity at Quarterly Meeting 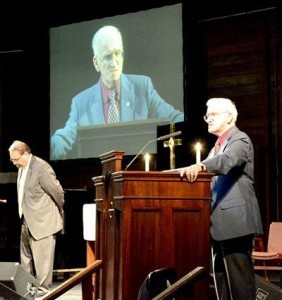 John Crane (l) and Robert Upchurch (r) at 2014 Gathering of the Laity[/caption] The Board of Laity for the Western North Carolina Conference met on Sunday, February 15th at Bethel United Methodist Church in Thomasville, NC. Led by Robert Upchurch, the Conference Lay Leader, lay leaders from the eight districts gathered for worship with the Bethel congregation, shared in a meal, and then had their quarterly meeting.  Wade Loftin, the Conference Chairperson of Lay Servant Ministries, hosted the meeting at his home church. The Board of Laity generally meets four times a year, and over a three year cycle, they schedule meetings at churches in all eight districts. Michael Rich, Conference Web & Communications Manager, presented an overview of the communications program of the conference and offered assistance to the Board and to the district lay leaders in promoting events and telling the stories of vital churches and exciting programs and people across the Conference. The Board also heard reports from the committee planning for the 2015 Gathering of the Laity, which will be the 50th Annual meeting.  This year’s event is scheduled for August 7 & 8 at Lake Junaluska.  According to John Crane of Gastonia, brochures, website and registration will be ready to go within the next week to ten days, and plans are very firm. The event will include the Junaluska Singers and those who stay over for Saturday night will have the opportunity to hear Donald Davis, retired WNCC clergy and world famous storyteller. More details of the Gathering will be published soon. The meeting continued with further discussion of the future of this event and other offerings by the Board of Laity. There was real excitement about engaging the laity of the Conference in the 21st century and how the group can be relevant to the needs of younger and newer laity in The United Methodist Church. The Board of Laity will meet next on May 3rd at Madison United Methodist Church in Madison, NC in the Northern Piedmont District.