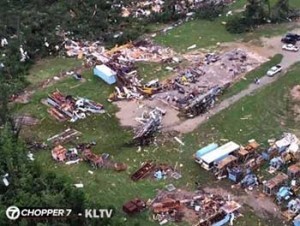 By Sam Hodges and Linda Bloom May 11, 2015 | UMNS The council chair of a United Methodist Church and his wife, a former secretary of the church, died in likely tornadoes that roared through Van, Texas, May 10. The Rev. Mark McClanahan, pastor of Van United Methodist Church, confirmed the deaths of David and Brenda Tapley, who he understood had died in their home. David Tapley was a certified lay minister in the denomination. Other church members suffered property damage and the church’s youth director, Jeff Siemens, had major damage to his home in storms that clobbered this community about an hour east of Dallas. More than 70 tornado reports were submitted to the National Weather Service over the weekend, with suspected twisters also touching down elsewhere in Texas and in Arkansas, Iowa, South Dakota, Colorado and Kansas. Earlier in the week, dozens of tornadoes wreaked havoc in Oklahoma. The U.S. tornado season started slowly this year compared to 2014, when 50 to 60 tornadoes struck southern states in April, said Greg Forrester, U.S. disaster response coordinator for the United Methodist Committee on Relief. While the geographic location of the tornado clusters is different this spring, “the numbers are pretty similar to what we experienced at this time last year,” he added. ‘New normal’ in Van In Van, where eight people remained unaccounted for the morning after the storm, an estimated 30 percent of the small city suffered damage. “What was normal yesterday may not be normal ever again, but we’ll find a new normal and God will see us through,” McClanahan told United Methodist News Service. Texas Conference Bishop Janice Riggle Huie issued a statement offering prayers of support. Utility crews are using the large parking lot at Van United Methodist Church and the church itself has become a staging area for local volunteers. “Lots of folks are coming to help, and we’re very grateful,” the pastor said. The town is closed to outsiders until search and rescue efforts are complete, but early response teams from both the Texas and North Texas conferences are standing by to assist, Forrester said. In other areas affected by tornadoes over the weekend, Byron Mann, the disaster response co-coordinator for the Arkansas Conference, headed to Nashville, Arkansas — where two people were killed in mobile homes — to assess damage there. The Arkansas conference still has teams doing recovery work in several communities hit by tornadoes on April 27, 2014. That work is part of a multi-agency effort that includes other faith-based, state and local organizations. The long-term recovery stage is where most conference seeking disaster funding from UMCOR, said Forrester, who noted that the U.S. conferences and districts “are pretty well equipped for the relief stage.” Still, he expects there may be a few emergency grant requests this tornado season to help with early response. Donations to UMCOR’s United States Disaster Response Advance #901670 help support the denomination’s continuing response to all U.S. disasters. *Hodges, a United Methodist News Service writer, lives in Dallas. Bloom is a United Methodist News Service multimedia reporter based in New York. Follow her at https://twitter.com/umcscribe or contact her at (646) 369-3759 or newsdesk@umcom.org