Our Story: Summerfield Churches Praising Together 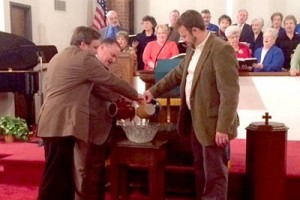 "One in baptism"[/caption] "A glimpse of heaven!” is how Rev. Olaf van de Klashorst’s described the ecumenical gathering on Sunday, January 25.  Three churches within 4 miles of each other gathered to praise God together! Pastor Olaf serves Mount Bethel Evangelical Covenant Church on Highway 65 in Rockingham County.  Mount Bethel hosted a celebration for the Week of Prayer for Christian Unity.  Also participating was Glencoe United Methodist Church served by Rev. Dr. Edward McKinney and Liberty Wesleyan Church served by Rev. Danny Janes. Family members of different churches got to worship together.  Preachers got to experience worship at a different church than that which they serve.  Children of different churches ate snacks and played together during the refreshment time after worship. [caption id="attachment_1415" align="alignright" width="207"] 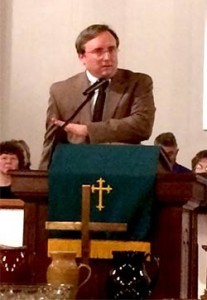 Dr. Edward McKinney, Glencoe UMC, Summerfield[/caption] Jesus’ visit with the Samaritan woman at the well in John 4 was the focal point of prayer, study, and the sermon for the evening’s service.   Pastor Ed McKinney said, “Most Jews traveling to and from Galilee to Jerusalem avoided Samaria like many avoid traveling on I-40 during Thanksgiving.  Not because the traffic was bad in 30 AD, but because no one wanted to meet, greet, or talk to a Samaritan.  However, Jesus chose to go through Samaria, meet the disgraced woman in the middle of the day, to offer her the gift of eternal life.  Churches need to follow Christ’s example by intentionally breaking boundaries and social norms to offer gifts of unconditional love to the marginalized in our own community.” Hearts were touched as these Christians came together to pray for unity.  A visible sign of their ministry together in the community was a donation of $436 to Bethany Elementary School.  The funds will be used for children needing assistance as well as equipment needs. The Week of Prayer for Christian Unity is sponsored by the World Council of Churches (WCC), which is the broadest and most inclusive among the many organized expressions of the modern ecumenical movement, a movement whose goal is Christian Unity. The special Week of Prayer for Christian Unity began in 1908 and continues to be celebrated annually for Christians to come together and witness that “they may be one so that the world may believe” (John 17:21). “We participate in the Week of Prayer for Christian Unity to remind ourselves that we belong to Christ, and that we are one family in Christ,” said Bishop Mary Ann Swenson, ecumenical officer of The United Methodist Church. Sarah McKinney is a layperson in the Northern Piedmont District