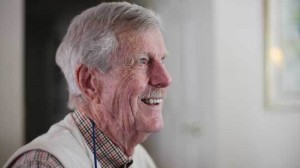 [This article appeared in the Lincoln Times-News on May 4, 2015.  Writer/Photographer: Phil Perry]

The Order of The Long Leaf Pine Society recognizes North Carolinians who demonstrate exemplary service or make exceptional contributions to the state or their communities. It is the most prestigious honor that can be bestowed upon a citizen of North Carolina. Reverend Joe Lane Ervin is now a member of this distinguished roster. He was presented the award by North Carolina Rep. Jason Saine during a church service at Boger City United Methodist Church on April 26. “I was in shock, to be honest,” Ervin said. “I was at a loss for words.” The honor was kept a secret for months prior to the ceremony. “I never dreamed of such an honor,” Ervin said. “I accepted it on behalf of the hundreds of volunteers who gave of their time and resources over the years for the betterment of others.” Ervin, 85, was born in Asheville and raised in a Methodist parsonage. He finished high school in Charlotte. He has spent 26 years of his life in Lincoln County and has a special bond with the community. He is married to Rosalyn Morris and he has two daughters and an adopted son — Susan Michael, Alice Lane Garaas and James Michael Pittman. “I have made some wonderful friends in Lincoln County,” Ervin said. “Those friendships have lasted a lifetime and I cherish them.” From 1967-1983 Ervin served as minister at Boger City United Methodist Church. “Those were 16 of the best years of my life,” Ervin said. “When I left, the bishop asked me about building ethnic minority churches based on the work I had already done.” Ervin took two months to confide in his closest friends and to pray about the proposal. In the end, he came to a conclusion and realized something about himself that he may not have previously known. “I determined that I was a people person,” Ervin said. “While I enjoy buildings, I have never had one wrap its arms around me and tell me they love me.”

Within North Carolina, Ervin has helped erect churches from northeast of Greensboro to Murphy, within the bounds of the church’s conference. Many of those churches were minority churches. He has also helped build churches in Tennessee and Louisiana.

Read the entire article at the Lincoln Times-News