News from the Council of Bishops Meeting

United Methodist bishops from Africa, Europe, Asia and the United States will gather in Berlin at Hotel Palace Berlin for the Council of Bishops meeting, from May 1-7. Main topics on the agenda include the development of vital congregations, the implementation of the four Areas of Focus, preparation for the 2016 General Conference of The United Methodist Church, and the role of bishops in helping to maintain the unity and faithfulness of the church in the face of many significant challenges and opportunities. “The Council of Bishops is meeting in Europe because The United Methodist Church is a global church with approximately 40 percent of United Methodists living outside the United States,” said Bishop Peter D. Weaver, executive secretary of the Council of Bishops. “It is important, as John Wesley emphasized, to be ‘connected’ with each other as we celebrate the diversity of gifts in our church and learn from each other how best to ‘make disciples of Jesus Christ for the transformation of the world’ in this 21st century.” Council of Bishops Elect New Officers 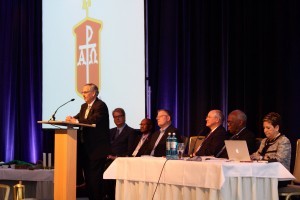 BERLIN: Meeting in Berlin today, the Council of Bishops of The United Methodist Church elected new officers who will assume their leadership roles in 2016. The new officers of the Council are: President – Bishop Bruce R. Ough, Dakotas-Minnesota Episcopal Area President designate – Bishop Kenneth H. Carter Jr., Florida Episcopal Area Secretary - Bishop Cynthia Harvey, Louisiana Episcopal Area (re-elected for two years) Connectional Table chairperson - Bishop Christian Alsted, Nordic and Baltic Episcopal Area Executive secretary – Bishop Marcus Matthews, Washington Episcopal Area Ecumenical officer – Bishop B. Michael Watson, North Georgia Episcopal area The ecumenical officer, executive secretary and chair of the Connectional Table each serve four-year terms. The president, president-designate and secretary serve two-year terms, which begin on the third day of the General Conference.  Read the entire story Council of Bishops Affirms Missional Direction for Next Quadrennium Berlin: The Council of Bishops, meeting in Berlin, affirmed a vision for a missional direction for the next quadrennium which includes partnering with schools to help end poverty, starting new faith communities, building a culture of call, reaching children with life-saving interventions, and equipping congregations with disciple-making processes to continue making new disciples and increasing the number of vital congregations. “Your leadership has led to great success and has changed the denomination in a positive way. We can measure the success, in part, through the growing number of vital congregations we see across the church,” said Bishop Bruce R. Ough, chairperson of the Connectional Table. The new strategic direction would build on and extend the Four Areas of Focus adopted in 2008 and continue the focus on creating vital congregations, but is flexible enough to allow local churches and annual conferences to adapt it according to what works best in their areas. Goals would be developed by General Conference 2016 that would include measures to aid in tracking progress. Read the entire story Council of Bishops Issues Pastoral Letter on Racism BERLIN:  The Council of Bishops issued a pastoral letter on racism to the 12.8 million people of The United Methodist Church affirming the sacredness of all lives and renewing their commitment to work for an anti-racist, pro-humanity church. The action came at the end of the Council’s weeklong meeting in Berlin after prayerful reflection and discussion about the topic. Earlier in the week, President of the Council Bishop Warner H. Brown Jr. had also issued a letter calling for prayer and healing. Read the entire letter