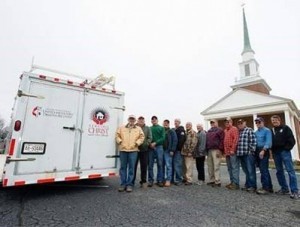 They are experts in their fields and missionaries at heart.

That combination transcends their handiwork from simply reshaping structures to helping rebuild lives.

The Northern Davidson Missional Network's Disaster Response Team, which operates within the Yadkin Valley United Methodist District, has been in existence since the late 1990s.

Over the course of the past two decades, the group comprised of volunteers and largely retirees has answered calls from Hurricane Floyd in eastern North Carolina to those in need here at home. Since Thanksgiving 2014 they have built 10 ramps for the handicapped at private homes around Lexington. Also recently, the team repaired and painted Alpha Pregnancy Support's new headquarters.

Some of the men extend their services across the seas. Pat Craver, a brick mason representing Mt. Olivet UMC, for example, has served on mission trips outside the country 15 times.

Read the entire article at The Dispatch