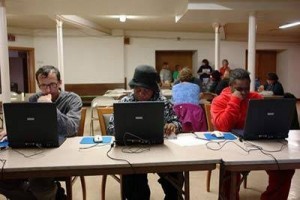 Photo courtesy of Project Community Computers Whether it is helping bring broadbend access to the community or inviting people to use church-owned computers, providing digital access can be a vital ministry. Summerfield United Methodist Church in Milwaukee is among churches that have adopted it.[/caption]

by Jeremy Steele (From Interpreter- January-February 2015)

Seventeen million children in the United States do not have access to computers with broadband connections, reports Connected Nation. Broadband allows large amounts of data to be transmitted simultaneously at high speed. Lack of access to broadband creates a problem that is far bigger than not being able to watch funny cat videos on YouTube. It represents a massive gulf in economic and educational opportunity that churches can help bridge — provided they have access. However, that is not always the case as Mark Doyal, director of communications for the Michigan Area, discovered in 2012. Doyal was surprised to find that as many as 45 percent of the United Methodist churches in Michigan did not have broadband access. He had no idea so many churches were without what has become a basic need. "Today, broadband is as important as running water and electricity," Doyal says. To help the churches move into the digital age, he collaborated with Eric Frederick, vice president of community affairs for Connected Nation. The organization is in several states and focuses on resolving the lack of broadband access. The first step, according to Frederick, is to find out if access is available. "Many people who think they do not have access might be being served by a smaller provider," he says. While Michigan has well over 100 broadband providers, most people only know about three or four because the smaller companies do not have the huge advertising budgets like those of AT&T and Comcast. Even with the smaller providers, though, many communities still lack service. Frederick and his team help an unserved community learn how to pool demand so they can attract a nearby provider with the promise of a profitable business. The arrival of broadband access in a community often uncovers a new form of inequality. Those who have lived on the edges of the digital age can be intimidated by all they don't know about computers and the Internet. Others simply cannot afford the service. Addressing digital inequality can be a new kind of social justice ministry. Though many people think of things like food pantries and literacy programs, a broadband installation can make digital justice ministries like Internet safety courses and free Wi-Fi possible. It may seem trivial, but simply offering free Wi-Fi can change the lives of children in a community. With more and more schools requiring students to do online research, participate in forums and post blog entries, students without Internet access can fall through the cracks. However, when churches open their doors — and computers — to these children in need, these students receive a hand up in their education. It all starts with broadband access. If you want to start the process for your church or district, the best place to begin is checking the National Broadband Map, www.broadbandmap.gov, and contacting your state's version of Connected Nation. You can find a full list of those organizations at the State Broadband Initiative Organization List. The Rev. Jeremy Steele is Next Generation minister at Christ United Methodist Church, Mobile, Ala. He is also an author, blogger and frequent contributor to MyCom, an e-newsletter published by United Methodist Communications.