7 Principles to Lead with Imagination

IMAGINATION is about seeing what others don’t see. In a disruptive world, we need leaders with more imagination. We all have the capacity for imagination and applied it has the power to unlock or fullest potential.

Brian Paradis was the Chief Financial Officer for Florida Hospital when he was tasked with leading the troubled organization in 2006. Plagued with doubt and inexperience, he records his journey in Lead with Imagination, to turn the enterprise around.

Lead with Imagination he writes is about “how to lead and how to do it with imagination. It is first about how to be, about character, before checklists and a list of to-dos.” It’s about “how to release yourself and those you lead from the constraints of the mind’s own making and those of our organizations.”

This is a powerful book. Honest, straightforward, and insightful. The lessons Paradis has learned on his journey, we can learn along with him. He cites a passage from General Gordon Sullivan’s book, Hope Is Not a Method, that is particularly instructive. Sullivan was a primary inheritor of a U.S. Army in shambles after Vietnam.

Today’s problems can be so close, so intense, that they become like blinders. Getting beyond today begins by imagining your organization out in the future. Ask yourself “What could be?” Postulate the new paradigm, and then imagine your organization in it. Many people seem uncomfortable with this process. They see it as too much art and too little science—as irrelevant theology in a world that has deadlines to meet. It is not. It is how the Army’s leaders of the 1970s and 1980s built the Army that was successful in the Persian Gulf War. It is how successful leaders in business, in all walks of life, in fact, operate: by keeping their eyes on today and on the vision—always moving forward.
Imagination is about removing those blinders Sullivan describes. Below, I have reproduced his summary of each of Paradis’ seven principles. You will need to read the stories in each of these chapters to get the full impact of his message.

1. Love in All Interactions


Love is the foundation, the soil, and the fuel for imagination. Love is both power and powerful. An act, service, or business endeavor done in love universally turns out better. However, love is hard. It is much easier to give in to fear, cynicism, and self-interest than to lead, live, and serve with love.
Paradis says love should be our brand, first inside our organizations so that it can radiate outside our organizations to whomever we serve.

2. Out of the Comfort Zone: Leaning into Authenticity and Humility


Once you commit to the principle of love, a high hurdle presents itself when leaning into authenticity in your leadership. At the same time, you must become self-aware about the influence your ego casts. Your ego must be managed. There is not a simple formula for this work. The struggle is the heart of this part of the journey to lead with imagination. It is difficult, if not impossible, to move forward effectively without consistency and balance to your words matching your actions.
Authenticity and humility build trust.

I end where I began: authentically making mistakes, and in humility, saying sorry, asking for forgiveness, and admitting that sometimes I just don’t know. …This is the place where you will earn the trust of the people you have the privilege to lead as a servant.

3. Chaos, Calm, and A Canvas: Creating the Environment That Matters


A leader’s primary job is to set the stage, not perform on it. If you want to lead with imagination, you must unleash the power, capacity, and energy of the many and release the stranglehold of the few—even if the few includes you. This is creative work. We often use the language of ‘creating culture’; however, we don’t think enough about what those words mean. This is work that involves careful thought and consideration of every decision we make as another brushstroke applies the paint, either moving us toward a performance masterpiece of moving us away from it.

4. The Act of Fearlessness: Practicing Vulnerability and Right Risk-Taking


Vulnerability is about putting yourself in harm’s potential way, or ‘out there,’ in order to accomplish something. It requires clear and creative action. It exposes you. In that place of exposure, we move from preparing to lead to leading with imagination. First, we take risks personally, then we can begin taking right risks organizationally. This is where the trifecta of imagination, creativity, and innovation get their solid foothold in what might be described as virtuous momentum.


Curiosity starts with questions. Both quality and quantity matter. Asking them is less than half the process. Holding the answer open, suspending judgment, questioning: do we even have the right answer yet? That is the larger half. That is the art.

Curiosity is next about pursuing this process within the team, designing the space both physically and psychologically that is safe and collaborative, and tolerating the possible inefficiency of a ‘best idea wins’ mind-set. It is being curious about customers and stakeholders, anchored with empathy. Far too many times, we stop asking and listening, believing we know the answers and leaving the most important insights undiscovered. Finally, curiosity is about being relentless and disciplined about the process.

6. The Misunderstanding About Humor


Laughter creates a runway for love to land on, and then take off again. Life is serious, to be sure. Organizations are serious, too, but they are made up of humans. And because of that, humor contributes an essential living element to culture. Humor makes us human. It connects us. It gives us energy and capacity to handle stress and challenge. It lifts us. If we believe people are our greatest organizational capacity, then infusing humor into an enterprise is a high return on investment and undervalued as a creative and cultural force. Humor opens a pathway to breakthroughs and new insights. It becomes a competitive advantage.

7. Connecting the Dots: Doing Whatever It Takes


Leadership is hard work. Leading with imagination and leading for results require skill and competence, constant self-evaluation, a servant’s heart, and a relentlessness to get it ‘mostly’ right. It is about asking the important and difficult questions of yourself and of the organization and waiting for the answers. It is about engaging and encouraging what is working and owning and dealing with what is not. It is about finding the way and doing whatever job needs to be done to support the team. It is about continuously and consistently imagining the vision, communicating it, and taking daily action toward it. Benjamin Zander, conductor of the Boston Philharmonic Orchestra, has described the ‘long line’ or vision of musical piece. He explains how the ‘line’ is easily lost with too much attention to single notes or short passages. As leaders, it is our constant job to keep bringing our organizations and enterprises back to the long line of the music and connecting the dots back to the big why.
Click here to view the original article on the Leadership Now website. 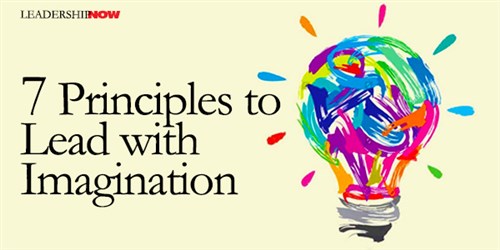