Are We Continuing to Execute Jesus? WNC United Methodists Grapple with the Death Penalty During Holy Week

On Tuesday of Holy Week, members of churches across the Conference gathered in Taylorsville to learn about the execution of Jesus. Facilitated by death penalty abolitionist, Shane Claiborne, and First UMC, Taylorsville pastor, Rev. Joel Simpson, participants were led through the traditional fourteen stations of the cross. On this night, however, the images for each station were far from traditional. These images portrayed the execution of Jesus as painted by the men awaiting their own execution on Tennessee’s death row. 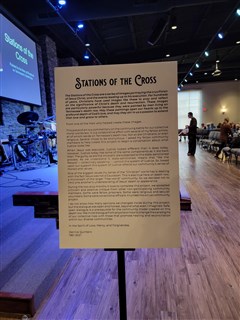 “This piece of art is a commentary on the continuing battle for our collective moral worldview,” says Derrick Quintero, one of the death row prisoners who participated in this project. “It is a collaborative effort with several of my fellow artists, all of whom reside on Tennessee’s death row. Not all are Christians or even religious. Several chose to be anonymous. I asked my fellow community members to help create this project to begin a conversation about what Justice looks like.”

Through collective sighs, gasps, and tears, a conversation on justice is exactly what transpired in Taylorsville. As Rev. Simpson and Claiborne walked the attendants through Jesus’ last moments prior to his execution with the visual aids of the prisoners’ artwork, they also shared their stories of ministering to and with prisoners on death row, statistics for executions in the U.S., and the struggles and triumphs of advocating for alternate solutions to the death penalty.

Recognizing the power of the paintings - since so many of us will never have the same perspective as the men on death row - Claiborne and Red Letter Christians, the community he co-founded with Rev. Tony Campolo, partnered with the prisoners to fight the systemic red tape to get the paintings out of the prison and available for public viewing. It was a process that took around three years.

“Where you sit can determine what you see,” Claiborne said. “Within these images is an invitation for what role the church can play – we who follow the One who said, ‘Blessed are the merciful.’” 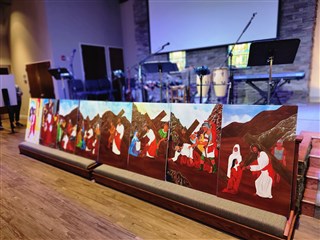 “As we watch Jesus fall under the weight of the cross,” Rev. Simpson pondered, “what better time to ask ourselves who are we crushing?”

In the tradition of the Stations of the Cross, Jesus falls three times on his way to Golgotha. Rev. Simpson asked us to reflect on our own societal cycle of repetitions. “We ended slavery and started Jim Crow. We passed the Civil Rights Act and fill our prisons [with black and brown bodies].”

“Through it all,” Rev. Simpson asserts, “we hold on to the promise of redemption and the hope of Jesus.”

How did Jesus get to the cross? Who is responsible for his execution? Judas betrays him. The Sanhedrin put him on trial. The crowds cry, “Crucify him!” Pilate washes his hands of responsibility while issuing the command to have Jesus flogged and crucified. The Roman soldiers oversaw the journey to Golgotha and the nailing of his hands and feet. Someone actually hammered the nails. Which of these holds the title of the executioner?

In the U.S. justice system, a prosecutor calls for the death penalty. A jury finds the defendant guilty. A judge issues the sentence. The governor signs the death warrant. The warden oversees the imprisonment and execution. Prison staff prepares the inmate for execution. The executioners implement the mode of execution. And behind all of this are politicians who draft laws, courts who uphold laws, and citizens whose votes underscore and allow this entire process to take place.

“Everyone is a part of this system,” Claiborne reflects, “but no one wants to feel that they are responsible.”

Following the presentation, the floor was opened for audience dialogue and questions.

One audience member, Mary, shared a story of an inmate she knew who had come to terms with the fact that he was going to die in prison. “He accepted his fate, he just didn’t want to be buried at a state penitentiary,” Mary shared. “So, he wrote to his home church to request burial in their cemetery. The church denied his request.”

“We separate ourselves from those who are incarcerated, rather than putting ourselves in proximity with those who need our forgiveness and love…we’ve forgotten how to see people,” Rev. Simpson reminded us all.

According to Simpson and Claiborne, 90 percent of executions in the U.S. occur in the so-called “Bible Belt.”
“We, as Christians, are why this practice still exists,” said Claiborne.

Another attendee, Larry, remarked, “I’ve been in church 72 years and have never had a conversation like this in a church before.”

After the event, Larry shared that he has always been a supporter of the death penalty, even at one time thinking he could be a citizen executioner with a clear conscious.

“After tonight,” Larry said with tears in his eyes, “I don’t think I can ever support the death penalty again.”

“If this [conversation] has been neglected for people like me,” Larry continues, “who have been in church their whole lives, something is missing.”

“The transformation of our hearts begins when we pay attention to the hurt, the pain, and the suffering [of others],” said Rev. Simpson. “This is what we are doing when we look at the stations of the cross, when we are truly seeing Jesus' suffering. This is God paying attention to the hurt, pain, and suffering of the world by taking on this violence…As those who follow an executed and resurrected Savior, we want to be on the side of life, not death.”

The two faith leaders closed the session with this question, “What role will the church play in the abolition of state-sanctioned executions?”

As we have these difficult conversations in our churches, Claiborne reminds us, “You can’t change anyone’s mind by having an argument with them. Minds are changed when hearts are changed through stories and conversations with the people whose lives are directly impacted.”

“When Jesus was executed, Justice looked different than it does today,” said Quintero. "However, Justice today has some of the same components as it did back then. The guilty, as are the innocent, are subjected to this state-sanctioned process. As we understand it, state-sanctioned means that 'We the People” – collectively speaking – uphold this system of Justice. So, based upon our support this system of Justice reflects our community’s sense of morals and values.”

As we journey to the cross with Jesus this week, let us all consider how we can build a system of justice that reflects our Church’s sense of morals and values – that all people are Divine image-bearers, that all life is sacred, and that no one is beyond the grace and redemption of our executed and resurrected Savior.

The United Methodist Church, Social Principles, Paragraph 164 states, “We believe the death penalty denies the power of Christ to redeem, restore and transform all human beings. The United Methodist Church is deeply concerned about crime throughout the world and the value of any life taken by a murder or homicide. We believe all human life is sacred and created by God and therefore, we must see all human life as significant and valuable. When governments implement the death penalty (capital punishment), then the life of the convicted person is devalued and all possibility of change in that person’s life ends. We believe in the resurrection of Jesus Christ and that the possibility of reconciliation with Christ comes through repentance. This gift of reconciliation is offered to all individuals without exception and gives all life new dignity and sacredness. For this reason, we oppose the death penalty (capital punishment) and urge its elimination from all criminal codes.

The Stations of the Cross paintings by the men on Tennessee’s death row have been made available free via Red Letter Christians for us to post and print, but the artists have asked that they not be sold or reproduced commercially. Use them in your Holy Week worship or to start conversations with people.

Other organizations Claiborne recommended for those who would like to help with the ongoing efforts to find an alternative to capital punishment:
Witness to Innocence Project
Journey of Hope

Visit Red Letter Christians to learn more about the work of Shane Claiborne.