A Ride for the Common Good

“We met a woman who broke her hip falling off the border wall!”

He was yelling so I could hear him over the wind.

“Later on, while we were riding along the border wall, we saw someone fall and break their leg!!”

I peddled my bicycle faster, so I was near enough to hear him, while also listening to the car that was coming behind us.

“It’s built just high enough, if you jump or fall off, you won’t be able to walk away!”

I am riding across the state of Florida on the final stretch of a 3200-mile cross-country bicycle ride with the group We The People Ride. The purpose of the ride was to highlight the need for better immigration policies. Policies that do exactly what our faith asks of us: to welcome the foreigner and the stranger (Lev. 19:34). To remember this land is not ours - it is God’s, and we are all immigrants (Lev. 25:23).

I joined the group in November for the last section of the ride. I didn’t know anyone in the group. When I flew into the Tallahassee airport, two strangers driving from Ohio picked me up. I was provided with a bike, food, and a place to sleep each night. This little community was living out the very way of life they were asking our larger country to live out: to welcome and care for the stranger.

Though I wasn’t able to ride along the border, I was able to learn a lot from the riders who did. I found immigration is at the intersection of so many of our deep struggles in the U.S. At the core, immigration speaks to our tendency to devalue life.

We The People Ride spent the first 1600 miles of the trip riding along our southern border meeting immigrants, refugees, border patrol, and communities who are directly impacted by our immigration policies.

It became very clear that the purpose of the border wall isn’t just to deter immigrants. It’s meant to permanently harm and kill people. The term used is “Deterrence by death.”

The border wall used to be 10 feet high. Then, it was increased to 17 feet high. Now it is 30 feet high…because if you fall from 30 feet you won’t be able to walk away.  Our group not only heard stories about this but saw the effects firsthand when a man fell off and broke his leg.

The border wall is also strategically placed to funnel people into death traps, like the desert in Ajo, Arizona. The wall stops and invites people to try their luck crossing the desert. Thousands of people have died trying to make this journey as they run out of water and food. A wall doesn’t stop desperate people, and neither do deserts. In June 2021, 380 people died in the Arizona desert.

People try to cross the wall and desert in hopes of a better life. As people of faith, we know these stories. This is the story of Hagar in the desert, the story of the Israelites in the wilderness, the story of Mary, Joseph, and Jesus fleeing to Egypt…all searching for life and hope and freedom.

Our government doesn’t track migrant deaths, but the communities on the border do. These cities and towns care deeply for the immigrants and refugees. Groups from these communities literally travel into the desert and leave food and water hoping people might find it and survive their trek through the desert.  Maria Singleton lives in Ajo and shared that they’re deeply impacted knowing people are dying around their community. Bodies are found all around the desert and even just outside of town. In Arizona, over the past 10 years, almost 4,000 migrant bodies have been found (and surely more people have died since it takes as little as three weeks for a body to disappear in the desert).

As our group road through these communities who live on the U.S. border, they asked the same question to everyone: “What do you know that you wish everyone else in our country knew?” Citizens, mayors, men, women – everyone who lived on the border always had the same answer: “Would you please tell people that it’s not dangerous here. It’s not true what people are saying about us. It’s not dangerous to live on the border.”

What is happening on our southern border is a result of the false stereotypes we have created. We’ve been fed the story that living on the border is filled with immigrant criminals, rapists, drug lords, and the cartel. These are lies that feed our fear; our fear of strangers, non-white bodies, and people who are poor and from poor countries. This has created the extremely toxic narrative in our country that everyone coming across the southern border is dangerous and a threat.

This is not what the communities who live on the border in the U.S. experience though. These communities care deeply for immigrants and refugees. They advocate for a change in our immigration policies. These cities and towns are teaching us how to live and work for the common good of all people.

As people of faith, and as United Methodists, we must be advocating for Common Good immigration policies. We The People Ride understands the “Common Good” to mean “setting policies leading to the inclusion of immigrants, refugees, asylum seekers through a clear, fair, accessible path to migrate into the United States.” Learn more here: www.wethepeopleride.org

Every person I spoke with on the ride (people were constantly talking with us when we stopped places) agreed that our immigration system is not working, but most people don’t understand how harmful our border policies are for immigrants.

Take for instance the policy coined “Remain in Mexico” – a Trump-era policy that is continuing under President Biden. This policy massively reduced the number of asylum seekers to a record low of 15,000 and requires anyone seeking asylum to wait in Mexico.

Now, tens of thousands of asylum seekers are in make-shift camps with no money or resources All the people our group talked to said they paid to make this journey (many selling everything they had) and also ended up in debt to criminal cartels along the way. They are to pay off the debt with the money they make in the U.S., which would also guarantee the safety of their families back home. Now they are stuck in Mexico, with no money or resources, at the mercy of the cartels.

While the Biden administration has raised the number of asylum seekers, it still isn’t high enough to fix the problem we’ve created. People came to the border, not only with the hopes of gaining asylum but of being able to wait safely in the U.S. as their case is adjudicated (which can take 6 months or more). By drastically lowering the number of people granted asylum, and by requiring everyone to wait in Mexico, we have trapped people. They cannot come and they cannot go. They cannot find a safe place.

Our immigration policies have been, and continue to be, literal death sentences for thousands of innocent people.

We need Common Good immigration policies. Our faith demands it. 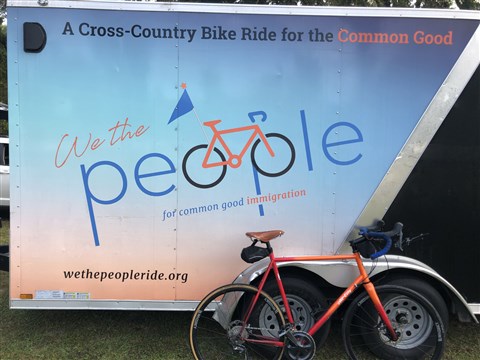 Find out more about We The People Ride and help make a change here: https://wethepeopleride.org/why-we-ride/#common-good-approach