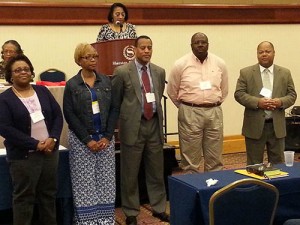 The idea for an ethnic caucus that addressed the concerns and needs of the Black constituency of the newly merged United Methodist Church (UMC) emerged in 1967 from conversations between the Rev. James Lawson, Dr. Negail Riley, Rev. Marshall Hodge, Dr. Gilbert Caldwell, Bishop Woodie W. White and Ms. Minnie Stein.

In March 1968 a National Conference of Negro Methodists was convened and adjourned as Black Methodists for Church Renewal.1 It was at this conference that the words “Our time under God is now,”2 were spoken by Dr. Ernest Smith. Those prophetic words later became the motto of BMCR, and they are as relevant today as when they were uttered 49 years ago.

he WNC-BMCR caucus is still here asking the hard questions about the future of Black leadership, both clergy and lay. Both are integral to the process of forging a more inclusive United Methodist Church.

BMCR is still here advocating for unity and standing against systemic injustice; we are still here acting as the agitating conscience on all boards and agencies; and we are still here to initiate, develop, and implement strategies for the development and growth of strong black local churches.3

In recent years, the WNC-BMCR Caucus has been instrumental in bringing together multicultural audiences for the WNCC celebration of the life and legacy of Rev. Dr. Martin Luther King, Jr. Our Resident Bishop, Dr. Larry M. Goodpaster, has been the keynote speaker for the past two annual celebrations. Bishop Goodpaster has been a strong and vocal champion for unity, justice, and racial inclusivity during his entire tenure in Western North Carolina. BMCR is grateful for his impassioned leadership.

Let me be clear on this point, BMCR was not created to be an anti-white, divisive or separatist organization. We exist because we understood that the best advocates for Black people were the people themselves.4 We could not depend on advocates to rise from among the ranks of the majority culture, the very ones who historically and systematically negated our humanity. Indeed, BMCR’s mission is “to raise up prophetic and spiritual leaders who will be advocates for the unique needs of Black people in The United Methodist Church.”5

Strong and inspired leadership has sustained BMCR over its 49 year history. Today, the need for leadership among lay and clergy has never been greater because we face the challenges of a new generation. Perhaps the challenges are eerily the same, only packaged differently. Regardless, we must continue to fight the good fight of faith. The WNC-BMCR Caucus is among the strongest caucuses within the Southeastern Jurisdiction. However, we are not all that we should be or all that we could be. We desire, (no, we need) the support of every Black clergy, lay person, and local congregation in order to rise to the level of consistent performance to which we aspire.

In addition, we desire to be more inclusive, so all ethnicities are welcome to come aboard, to work shoulder-to-shoulder with BMCR to achieve its goals and purpose.

Please go to our website at www.bmcrumc.org to read more about our history, purpose and structure.

Membership, which runs from January to December, is $20 for adults and $10 for youth. All are welcome. There is a place in the caucus for you to exercise your spiritual muscles, to bring about a more just and unified United Methodist Church.

1 White, Woodie W. Bishop, “A Caucus Is Born,” Essays on the History and the Future of Black Methodist for Church Renewal, BMCR Bible, Abington Press, Nashville, 2010.

The Rev. Miller Carter is the WNC-BMCR Coordinator and the Pastor of Simpson-Gillespie UMC.