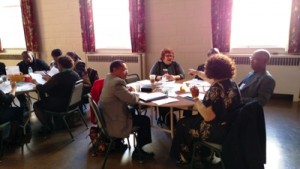 On the Saturday before the national holiday recognizing the dream and legacy of the nation’s greatest moral leader, the constituents of Western North Carolina gathered for The Annual Dr. Martin Luther King, Jr. Celebration. The day was filled with the hope that Dr. King’s dream of a ‘beloved community’ would be realized (made real, understood), visualized (seen), and actualized (acted upon). And so, with the theme “Opening the Door to Reality: All Lives Matter,” the people of God engaged the work of shaping the conscience of the community of faith.

The celebration was held at First United Methodist Church, Salisbury, NC where the Pastor is The Rev. Mark Conforti. After Rev. Conforti welcomed the more than 150 participants, the tone for the day was set with an opening dramatic monologue by Mrs. Doris Vincent, of Laughlin Memorial, Greensboro. The dramatic rendering quickly grabbed our attention by offering an historic perspective of America’s callous treatment of African-Americans. As Mrs. Vincent spoke, images were flashed on the screen and music was rendered, which helped participants realize and visualize the importance of the gathering. Dr. King certainly had a vision that all lives matter, which was the theme for the day, but his conscience caused him to speak out on behalf of those lives that did not seem to matter. In the 1960s that meant speaking out on behalf of African-Americans, the poor, and the disenfranchised. However, the current reality still suggests that there are those whose lives seem to count less than others.

The highlight of the event, though, was the Table Talk discussions, which took place at each table during the lunch hour. The Table Talk questions were crafted by Rev. Matt Smith and Dr. Otto Harris, III. The discussions were rich and moving. One of the most poignant discussions dealt with the “Black Lives Matter” movement, which captured a lot of attention in the past year. The movement arose as a response to a number of officer-involved shootings of black youth and men. Some were suspicious of the motives and means of Black Lives Matter (BLM), stating All Lives Matter. But, in a video clip, President Obama defended BLM, saying, “We as a society, particularly given our history, have to take this seriously. The African-American community is not just making this up, and it’s not just something being politicized. It’s real, and there’s a history there.” When some people accused the BLM movement of reverse racism, i.e., privileging Black lives over those of other people, President Obama said, “I think everybody understands all lives matter. I think the reason that the organizers use the phrase ‘Black Lives Matter’ was not because they were suggesting nobody else’s lives mattered. Rather, what they were suggesting was there is a specific problem that is happening in the African-American community that’s not happening in other communities. And that is a legitimate issue that we’ve got to address.”

The design team for this event chose to go with the ‘All Lives Matter’ in its theme, not to dismiss “Black Lives Matter,’ but as an affirmation of the spirit of Dr. King, who said, “We must learn to live together as brothers [and sisters] or perish together as fools.” Several individuals shared their thoughts after engaging in this meaningful and relevant dialogue. In light of what was said and heard, each person was asked to reflect on what God might be calling them to do. Additionally, each person was challenged to go forth to promote the cause of justice for those who are oppressed and promote deeper unity. 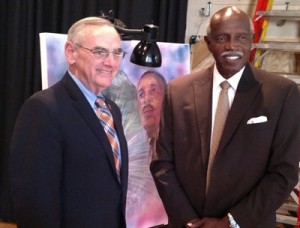 Bishop G’s message tied everything together in his unique way. Bishop G has been a passionate supporter of The MLK, Jr. Celebration during his tenure in Western North Carolina. This event was his last MLK, Jr. Celebration as the Resident Bishop of the Western North Carolina Conference, pending his retirement at the end of this conference year. He was presented with a commemorative plaque on behalf of Black Methodists for Church Renewal and the Justice and Reconciliation Team of WNCC. He was also presented the interpretive drawing by Mr. Fredrick Jones.

The Rev. Miller Carter, Jr. is pastor of Simpson-Gillespie UMC, chairperson of WNC’s Black Methodists for Church Renewal and a member of the MLK, Jr. Celebration Planning Team.